It happened – I finally played the mirror match on MTGO

It happened – I finally played the mirror match on MTGO

I was happily surprised on Monday evening when I started up MTGO Legacy league, quickly dispatched an Eldrazi-post opponent, then experienced this familiar start in game one of match two: 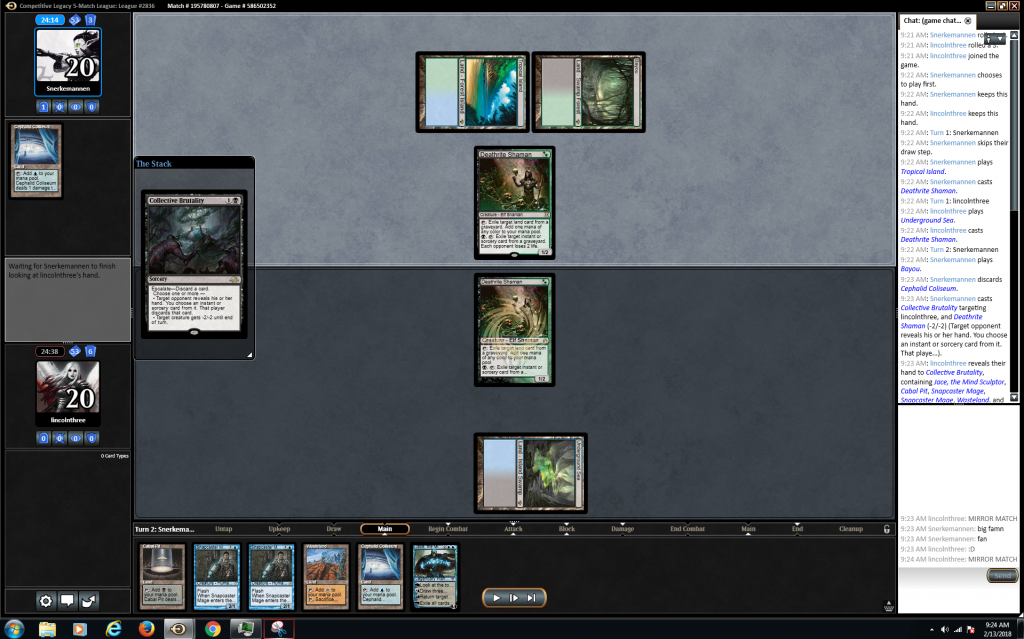 I recognized the mirror match instantly, and immediately felt the pressure, telling my girlfriend who was reading next to me, “Well… I guess I’d better win this match.” She expressed her support and went back to her book.

Collective Brutality worked against me like a charm, though he did (somehow) manage to unluckily whiff on the escalate to take an instant or sorcery. My opening hand was a bit odd, and I probably should have thrown it back, but there was some interaction and a Deathrite Shaman so… why not?

I drew into double Hymn to Tourach to keep him from going crazy, but was working with two pain-lands against my life total.

My opponent, Eirik, was familiar with me, this website, and pretty skilled with the deck, but I’ve had a bit more experience in the mirror-match, and I was able to win game one with a comeback from two life that left him with zero permanents: 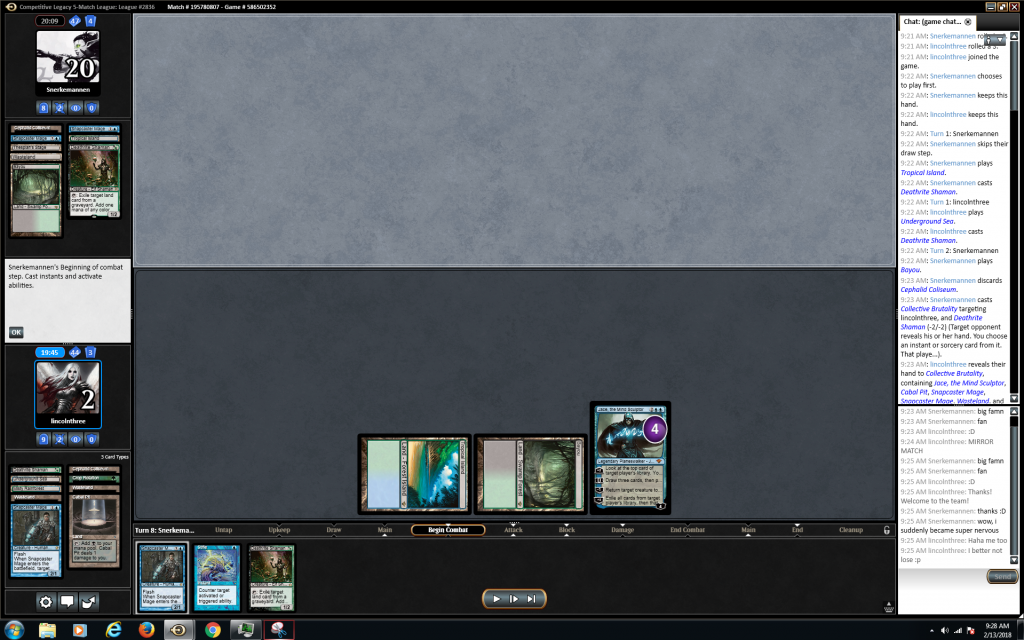 Game two went a bit differently. He landed an early Liliana of the Veil, and I resolved a Liliana, the Last Hope, but… he TopDecked well, and found his Maelstrom Pulse to dispatch *my* Liliana, this time leaving me with zero permanents: 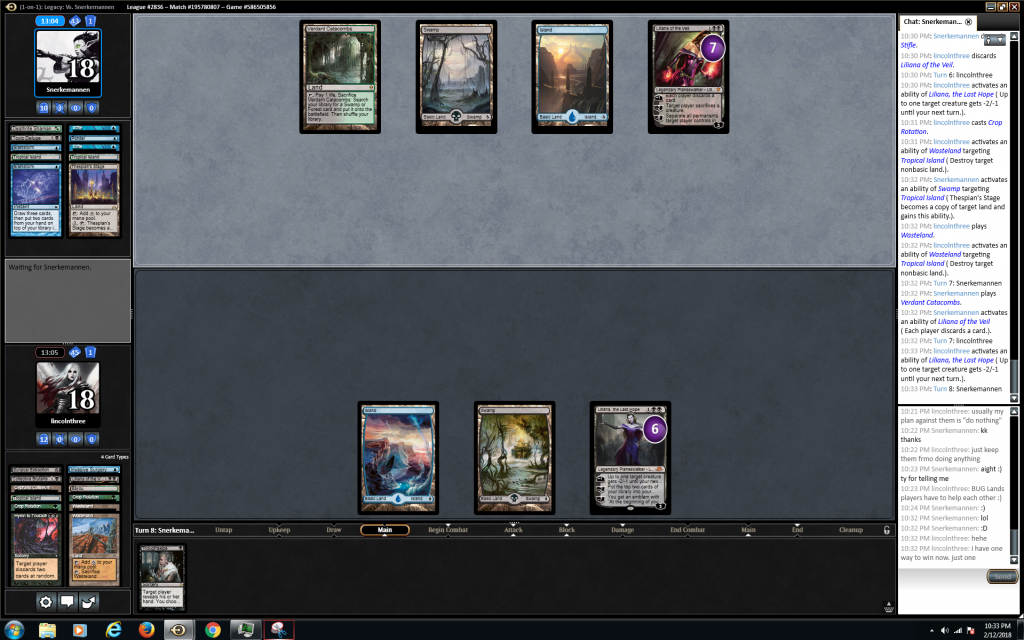 I almost stabilized again, but Liliana was ticked up pretty high and I was 99% going to lose this game. It wasn’t worth running down the clock, so I opted for another chance with game three.

This game went a bit more to plan, with another awkward hand that promised just enough interaction to prevent dying, land something, and win. It worked. I started off with a turn-one Thoughtseize to reveal a similarly awkward (but solid) hand. My plan was to stall and then land Garruk Relentless to grind out a win.

After some back and forth with Wasteland and Loam, I waited for him to cast Life from the Loam to double Wasteland me, which had unfortunately (for him) put his only second copy of Loam into his graveyard. So when he wastelanded me and I cast Crop Rotation for Bojuka Bog in response, if felt particularly brutal: 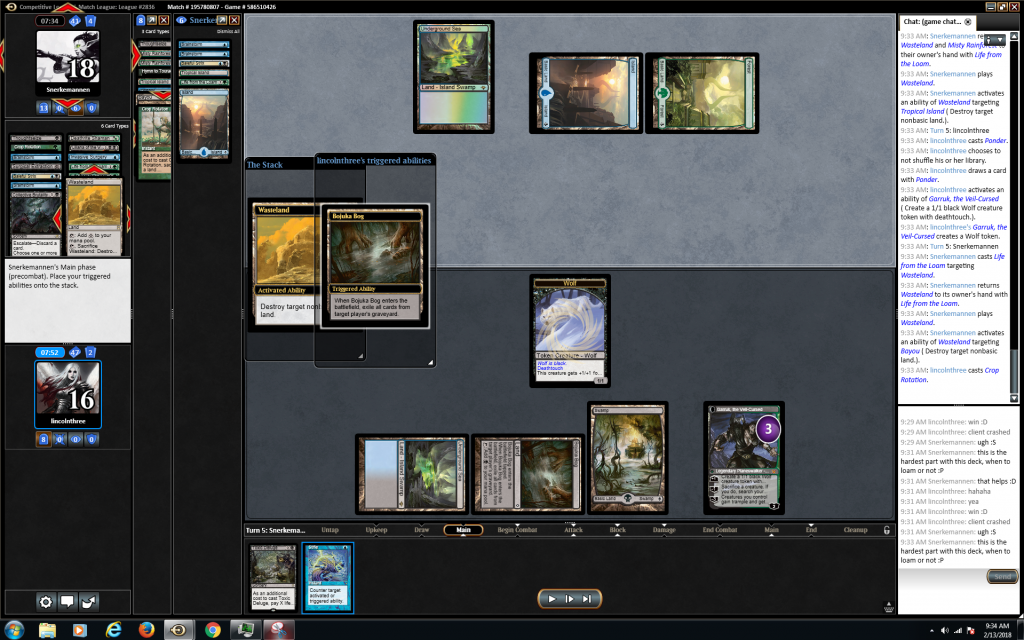 And we moved on…

The game was fairly set from there on out. Keep him from blowing me out with Marit Lage and everything would be fine – it was. 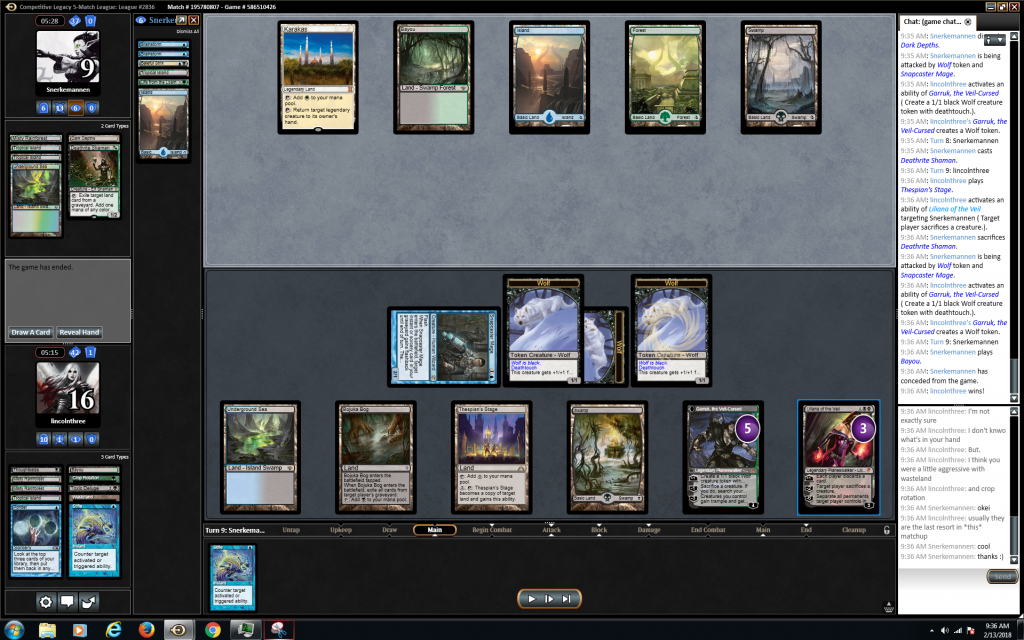 Thanks for the great games, Eirik, and keep testing with the deck! Eirik also inspired me to set up a Facebook group for “Baxter BUG” or “BUG Control Lands”, so… here it is.

Lincoln Baxter, III is a competitive Magic: The Gathering player and deck brewer, skilled with control decks. He enjoys the game, and making sure his opponent doesn't. When he is not playing, practicing, or promoting Legacy, he works as the owner of TopDecked MTG - a deck-list builder / simulator, mobile pairings app, collection manager, event finder, and more.